Liberia’s forest resource is one of the country’s primary natural assets and it is an important remnant of West African forest. Information about the evolution of the forests during the 20th Century is rather sparse but Van Rompaey provides a comprehensive review of map sources up to the year 2002. In his report he cites the work of Hammermaster (1985) and states that “Hammermaster has prepared a working map series of 24 sheets at 1:125,000. I didn’t find any holding of these maps” adding that “I know this report but I have never seen Hammermaster’s maps“.  The report is available from the Food and Agriculture Organization but not the maps. The only other map from this period is the Ministry of Planning and Economic Affairs map of 1979 at 1:1,000,000 scale, although the south-eastern part of the country is not mapped because of cloud cover on the aerial photography. 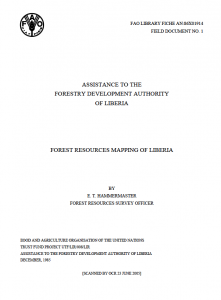 Much of Liberia’s infrastructure was destroyed during the two civil wars (1989 – 2003) and a fire in the Forestry Development Authority’s (FDA) storage container (around 2015 or 2016) means that short of finding the original aerial photography and reinterpreting it there is little chance to reconstruct the extent of Liberia’s forests pre 1989. The combination of the civil wars, the passage of time and the loss of the archive means that institutional memory becomes lost.

However, whilst working at the FDA in 2016 one of the now retired staff suddenly got up, walked across the room and got a battered map tube from the storage cupboard and said he had some old maps. Pulling the maps out of the tube revealed 23 of the 24 original transparencies of the Hammermaster map sheets at 1:125,000 scale, dated 1983.

The compilation note on the maps says “Compiled by the  Remote Sensing Unit, Forestry Development Authority as Phase (1) of the National Forestry Resources Survey Project Sponsored by the Government of Liberia and the World Bank in 1983“.

Realising that these were the original line drawings and that they were possibly the only remaining copy it was arranged that they should be scanned by the FDA with the support of the EU’s VPA Support Unit. This was facilitated in Monrovia by the Liberia Institute of Statistics & Geo-Information Services which has a large format scanner.

Much work needs to be done to convert them into geo-referenced spatial data suitable for land cover change analysis so that they can contribute to Liberia’s forest resource management and become a national heritage resource.

You can find out more about which cookies we are using or switch them off in settings.

This website uses cookies so that we can provide you with the best user experience possible. Cookie information is stored in your browser and performs functions such as recognising you when you return to our website and helping our team to understand which sections of the website you find most interesting and useful.

Strictly Necessary Cookie should be enabled at all times so that we can save your preferences for cookie settings.

If you disable this cookie, we will not be able to save your preferences. This means that every time you visit this website you will need to enable or disable cookies again.